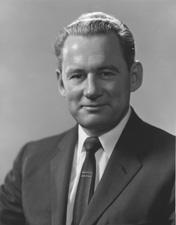 ENGLE, Clair, Representative and a Senator from California; born in Bakersfield, Kern County, Calif., September 21, 1911; attended the public schools; graduated from Chico (Calif.) State College in 1930 and from the University of California Hastings College of Law in 1933; admitted to the bar in 1933 and commenced practice in Corning, Calif.; district attorney of Tehama County, Calif., 1934-1942; member, State senate 1943; elected on August 31, 1943, as a Democrat to the Seventy-eighth Congress to fill the vacancy caused by the death of Harry L. Englebright; reelected to the Seventy-ninth and to the six succeeding Congresses (August 31, 1943-January 3, 1959); chairman, Committee on War Claims (Seventy-ninth Congress), Committee on Interior and Insular Affairs (Eighty-fourth and Eighty-fifth Congresses); was not a candidate for renomination in 1958, having become a candidate for United States Senator; elected as a Democrat to the United States Senate in 1958 and served from January 3, 1959, until his death in Washington, D.C., July 30, 1964; interment in Oak Hill Cemetery, Red Bluff, Calif.
Courtesy of Biographical Directory of the United States Congress
Next page