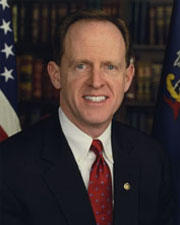 a Senator and Representative from Pennsylvania; born in Providence, Providence County, R.I., November 17, 1961; graduated from LaSalle Academy, Providence, R.I.; graduated Harvard University, Cambridge, Mass., B.A., 1984; elected to Allentown, Pa., Government Study Commission 1994; elected as a Republican to the One Hundred Sixth and to the two succeeding Congresses (January 3, 1999-January 3, 2005); was not a candidate for reelection in 2004, but was an unsuccessful candidate for nomination to the United States Senate; elected as a Republican to the United States Senate in 2010; reelected in 2016 for the term ending January 3, 2023.
Courtesy of Biographical Directory of the United States Congress
Next page