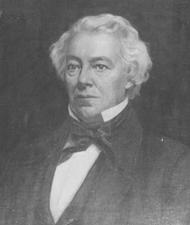 EVANS, George, Representative and a Senator from Maine; born in Hallowell, Maine, January 12, 1797; graduated from Bowdoin College, Brunswick, Maine, in 1815; studied law; admitted to the bar and practiced in Gardiner, Maine; member, State house of representatives and served as speaker in 1829; elected to the Twenty-first Congress to fill the vacancy caused by the resignation of Peleg Sprague; reelected to the Twenty-second and five succeeding Congresses and served from July 20, 1829, until his resignation, effective March 3, 1841; chairman, Committee on Expenditures in the Department of the Treasury (Twenty-sixth Congress); elected as a Whig to the United States Senate and served from March 4, 1841, until March 3, 1847; unsuccessful candidate for reelection in 1846; chairman, Committee on Manufactures (Twenty-seventh Congress), Committee on Finance (Twenty-seventh and Twenty-eighth Congresses), Committee on Territories (Twenty-eighth Congress); resumed the practice of law in Portland, Maine; member of the commission to ascertain claims against Mexico in 1849 and 1850; elected attorney general of Maine in 1850, 1854, and 1856; died in Portland, Cumberland County, Maine, April 6, 1867; interment in Oak Grove Cemetery, Gardiner, Maine.
Courtesy of Biographical Directory of the United States Congress
Next page