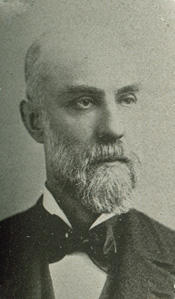 EVANS, Walter, (nephew of Burwell Clark Ritter), Representative from Kentucky; born near Glasgow, Barren County, Ky., September 18, 1842; attended the public schools near Harrodsburg, Ky.; moved to Hopkinsville, Christian County; deputy county clerk in 1859; served as a captain in the Union Army 1861-1863; served as deputy and later as chief clerk of the circuit court; studied law; was admitted to the bar in 1864 and commenced practice in Hopkinsville; delegate to the Republican National Conventions in 1868, 1872, 1880, and 1884; elected to the State house of representatives in 1871 and to the State senate in 1873; moved to Louisville, Ky., in 1874 and continued the practice of law; unsuccessful candidate for election in 1876 to the Forty-fifth Congress; Republican nominee for Governor in 1879; appointed by President Arthur as Commissioner of Internal Revenue May 21, 1883, and served until April 20, 1885, when he returned to Louisville and resumed the practice of law; elected as a Republican to the Fifty-fourth and Fifty-fifth Congresses (March 4, 1895-March 3, 1899); unsuccessful candidate for reelection in 1898 to the Fifty-sixth Congress; appointed by President McKinley judge of the District Court of the United States for the District of Kentucky March 4, 1899, and served until his death at his home in Louisville, Ky., December 30, 1923; interment in Cave Hill Cemetery.
Courtesy of Biographical Directory of the United States Congress
Next page