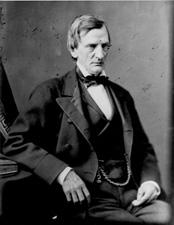 a Senator from New York; born in Boston, Mass., February 6, 1818; attended the Boston Latin School and graduated from Yale College in 1837; studied at Harvard Law School; admitted to the bar in New York City in 1841 and practiced law; assistant United States district attorney 1849-1853; unsuccessful Republican candidate for the United States Senate in 1861; member of the State constitutional convention 1867-1868; appointed Attorney General of the United States by President Andrew Johnson 1868-1869; chief counsel for President Johnson in the impeachment proceedings in 1868; counsel for the United States before the tribunal of arbitration on the Alabama claims at Geneva, Switzerland, in 1872; counsel for President Rutherford Hayes, in behalf of the Republican Party, before the Electoral Commission in 1876; appointed Secretary of State of the United States by President Hayes 1877-1881; delegate to the International Monetary Conference at Paris 1881; elected as a Republican to the United States Senate and served from March 4, 1885, to March 3, 1891; chairman, Committee on the Library (Fiftieth and Fifty-first Congresses); retired from public life due to ill health; died in New York City, February 28, 1901; interment in Ascutney Cemetery, Windsor, Vt.
Courtesy of Biographical Directory of the United States Congress
Next page