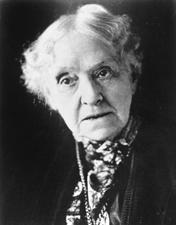 Note: We can only calculate an ideological score for members who have completed a minimum number of rollcall votes.

a Senator from Georgia; born near Decatur, De Kalb County, Ga., June 10, 1835; attended the common schools and graduated from the Madison Female College in 1852; moved to Bartow County, Ga., in 1854; taught school; writer, lecturer, and reformer with special interest in agricultural and women's issues; served as secretary to her husband while he was a Member of Congress 1875-1881; appointed by the Governor as a Democrat to the United States Senate on October 3, 1922, to fill the vacancy caused by the death of Thomas E. Watson, and served from October 3, 1922, to November 22, 1922, a successor having been elected; did not take the oath of office until November 21, 1922, and served just twenty-four hours while the Senate was in session; was not a candidate for election to fill the vacancy; aged 87 at the time of her appointment, is the oldest senator ever sworn in for a first term; the first woman to occupy a seat in the United States Senate; engaged as a writer and lecturer and resided in Cartersville, Ga., until her death in Atlanta, Ga., January 24, 1930; interment in Oak Hill Cemetery, Cartersville, Ga.
Courtesy of Biographical Directory of the United States Congress
Next page