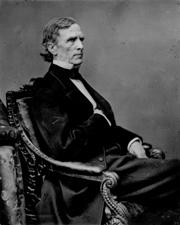 Representative and a Senator from Maine; born in Boscawen, Merrimack County, N.H., October 16, 1806; attended the common schools; graduated from Bowdoin College, Brunswick, Maine, in 1827; studied law; admitted to the bar in 1827 and practiced in Bridgeton, Bangor, and Portland, Maine; member, State house of representatives in 1832 and 1840; elected as a Whig to the Twenty-seventh Congress (March 4, 1841-March 3, 1843); declined to be a candidate for reelection in 1842; member, State house of representatives 1845-1846; unsuccessful Whig candidate for election to the Thirty-second Congress; member, State house of representatives 1853-1854; elected as a Whig to the United States Senate to fill the vacancy in the term beginning March 4, 1853, caused by the failure of the legislature to elect; reelected in 1859 as a Republican and served from February 10, 1854, to July 1, 1864, when he resigned to accept a Cabinet appointment; chairman, Committee on Finance (Thirty-seventh through Thirty-ninth Congresses); appointed Secretary of the Treasury by President Abraham Lincoln and served from 1864-1865; member of the peace convention of 1861 held in Washington, D.C., in an effort to devise means to prevent the impending war; again elected to the United States Senate as a Republican and served from March 4, 1865, until his death in Portland, Maine, September 8, 1869; chairman, Committee on Public Buildings and Grounds (Fortieth Congress), Committee on Appropriations (Forty-first Congress), Committee on the Library (Forty-first Congress); originally interred in Western Cemetery in Portland, Maine; later reinterred in an unmarked grave in the Fessenden family plot in Evergreen Cemetery.
Courtesy of Biographical Directory of the United States Congress
Next page