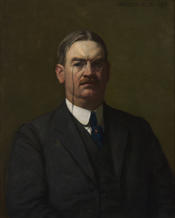 FITZGERALD, John Joseph, Representative from New York; born in Brooklyn, N.Y., March 10, 1872; attended the public schools, La Salle Military Academy (formerly Sacred Heart Academy), and was graduated from Manhattan College, New York City, in 1891; studied law in the New York Law School; was admitted to the bar in 1893 and commenced practice in New York City; delegate to the Democratic National Conventions from 1900 to 1928; trustee of Manhattan College in New York City; elected as a Democrat to the Fifty-sixth and to the nine succeeding Congresses and served from March 4, 1899, until December 31, 1917, when he resigned to resume the practice of law; chairman, Committee on Appropriations (Sixty-second through Sixty-fifth Congresses); appointed county judge of Kings County in March 1932, elected in November 1932, and served until his retirement on December 31, 1942; resumed the private practice of law; died in Brooklyn, N.Y., May 13, 1952; interment in St. Johns Cemetery, Middle Village, N.Y.
Courtesy of Biographical Directory of the United States Congress
Next page