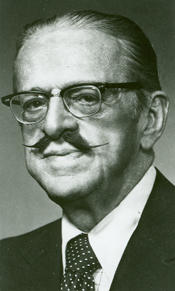 FLOOD, Daniel John, Representative from Pennsylvania; born in Hazleton, Luzerne County, Pa., November 26, 1903; attended the public schools of Wilkes-Barre, Pa., and St. Augustine, Fla.; was graduated from Syracuse (N.Y.) University in 1924; attended Harvard Law School and was graduated from Dickinson School of Law, Carlisle, Pa., in 1929; was admitted to the bar in 1930 and commenced practice in Wilkes-Barre, Pa.; attorney for the Home Owners Loan Corporation in 1934 and 1935; deputy attorney general for the Commonwealth of Pennsylvania and counsel for the Pennsylvania Liquor Control Board 1935-1939; director of the State Bureau of Public Assistance Disbursements and executive assistant to the State treasurer 1941-1944; elected as a Democrat to the Seventy-ninth Congress (January 3, 1945-January 3, 1947); unsuccessful candidate for reelection in 1946 to the Eightieth Congress; resumed the practice of law; elected to the Eighty-first and Eighty-second Congresses (January 3, 1949-January 3, 1953); unsuccessful candidate for reelection in 1952 to the Eighty-third Congress; again resumed the practice of law; elected to the Eighty-fourth and to the twelve succeeding Congresses and served from January 3, 1955, until his resignation January 31, 1980; was a resident of Wilkes-Barre, Pa., until his death there on May 28, 1994; interment in Saint Mary's Cemetery, Hanover, Luzerne County, Pa.
Courtesy of Biographical Directory of the United States Congress
Next page