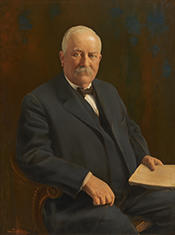 FORDNEY, Joseph Warren, Representative from Michigan; born on a farm near Hartford City, Blackford County, Ind., November 5, 1853; attended the common schools; moved to Saginaw, Saginaw County, Mich., in June 1869 and engaged in the lumber industry; afterward became the owner of extensive lumber enterprises; vice president of the Saginaw Board of Trade; member of the board of aldermen of Saginaw 1896-1900; elected as a Republican to the Fifty-sixth and to the eleven succeeding Congresses (March 4, 1899-March 3, 1923); chairman, Committee on Expenditures in the Department of the Navy (Fifty-ninth Congress), Committee on Ways and Means (Sixty-sixth and Sixty-seventh Congresses); co-sponsor of the Fordney-McCumber Tariff of 1922; declined to be a candidate for renomination in 1922; delegate to the Republican National Convention in 1908; returned to the lumber business in Saginaw, Mich.; also interested in banking and agricultural pursuits; died in Saginaw, Mich., on January 8, 1932; interment in St. Andrews Cemetery.
Courtesy of Biographical Directory of the United States Congress
Next page