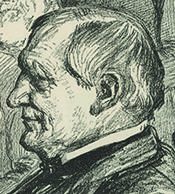 FORNEY, William Henry, (grandson of Peter Forney and nephew of Daniel Munroe Forney), Representative from Alabama; born in Lincolnton, Lincoln County, N.C., November 9, 1823; pursued classical studies, and was graduated from the University of Alabama at Tuscaloosa in 1844; served in the war with Mexico as a first lieutenant in the First Regiment of Alabama Volunteers; studied law; was admitted to the bar in 1848 and commenced practice in Jacksonville, Calhoun County, Ala.; trustee of the University of Alabama 1851-1860; member of the State house of representatives in 1859 and 1860; during the Civil War entered the Confederate Army in 1861 as a captain, and was successively promoted to major, lieutenant colonel, colonel, and brigadier general; surrendered at Appomattox Court House; member of the State senate in 1865 and 1866; elected as a Democrat to the Forty-fourth and to the eight succeeding Congresses (March 4, 1875-March 3, 1893); chairman, Committee on Expenditures in the Department of the Treasury (Forty-sixth Congress); was not a candidate for renomination in 1892; appointed by President Cleveland a member of the Gettysburg Battlefield Commission and served until his death in Jacksonville, Ala., January 16, 1894; interment in the City Cemetery.
Courtesy of Biographical Directory of the United States Congress
Next page