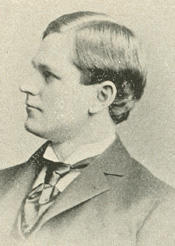 FOSS, George Edmund, (brother of Eugene Noble Foss), Representative from Illinois; born in West Berkshire, Franklin County, Vt., July 2, 1863; attended the common schools, and was graduated from Harvard University in 1885; attended Columbia Law School and the School of Political Science in New York City; was graduated from Union College of Law at Chicago, Ill., in 1889; was admitted to the bar the same year and commenced the practice of law in Chicago; elected as a Republican to the Fifty-fourth and to the eight succeeding Congresses (March 4, 1895-March 3, 1913); chairman, Committee on Naval Affairs (Fifty-sixth through Sixty-first Congresses); unsuccessful candidate for reelection in 1912; elected to the Sixty-fourth and Sixty-fifth Congresses (March 4, 1915-March 3, 1919); was not a candidate for renomination in 1918, but was an unsuccessful candidate for nomination to the United States Senate; resumed the practice of law; unsuccessful candidate for nomination in 1932 to the Seventy-third Congress; died in Chicago, Ill., March 15, 1936; interment in Graceland Cemetery.
Courtesy of Biographical Directory of the United States Congress
Next page