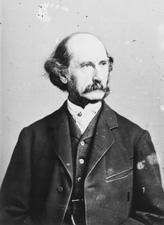 FOSTER, Lafayette Sabine, a Senator from Connecticut; born in Franklin, New London County, Conn., November 22, 1806; attended the common schools; received preparatory instruction and graduated from Brown University, Providence, R.I., in 1828; taught school in Providence and commenced the study of law in Norwich; took charge of an academy at Centerville, Md., and while there was admitted to the Maryland bar in 1830; returned to Norwich, Conn., and completed his law studies; admitted to the bar in 1831 and commenced the practice of law; editor of the Republican, a Whig newspaper; member, State house of representatives 1839-1840, 1846-1848, 1854, and served three years as speaker of the house; unsuccessful Whig candidate for Governor of Connecticut in 1850 and again in 1851; mayor of Norwich 1851-1852; elected in 1854 as a Republican to the United States Senate; reelected in 1860, and served from March 4, 1855, to March 3, 1867; unsuccessful candidate for reelection; served as President pro tempore of the Senate during the Thirty-ninth Congress; chairman, Committee on Pensions (Thirty-seventh through Thirty-ninth Congresses); professor of law in Yale College in 1869; member, State house of representatives 1870, and was elected speaker but resigned to accept a judicial position; associate justice of the Connecticut supreme court 1870-1876, when he retired; unsuccessful Democratic candidate for election to the Forty-fourth Congress; died of malarial fever in Norwich, Conn., September 19, 1880; interment in Yantic Cemetery.
Courtesy of Biographical Directory of the United States Congress
Next page