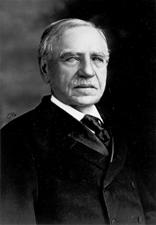 Representative and a Senator from Maine; born in Lewiston, Androscoggin County, Maine, September 2, 1830; attended the public schools in Lewiston and graduated from Bowdoin College, Brunswick, Maine, in 1850; studied law; admitted to the bar and commenced practice in Rockland, Maine, in 1853; returned to Lewiston, Maine, and practiced law; member, State house of representatives 1861-1862, 1867; mayor of Lewiston 1866-1867; attorney general of State of Maine 1867-1869; elected as a Republican to the Forty-second and to the five succeeding Congresses and served from March 4, 1871, to March 17, 1881, when he resigned, having been elected Senator; elected as a Republican to the United States Senate on March 15, 1881, to fill the vacancy caused by the resignation of James G. Blaine; reelected in 1883, 1889, 1895, 1901, and 1907, and served from March 18, 1881, until his death on August 8, 1911; served as President pro tempore of the Senate during the Fifty-fourth through the Sixty-second Congresses; chairman Committee on Rules (Forty-seventh through Forty-ninth Congresses), Committee on Commerce (Fiftieth through Sixty-second Congresses, except for the Fifty-third Congress); member of the commission which met in Paris in September 1898 to adjust terms of peace between the United States and Spain; died in Lewiston, Maine, August 8, 1911; interment in Riverside Cemetery.
Courtesy of Biographical Directory of the United States Congress
Next page