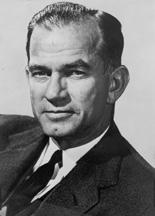 FULBRIGHT, James William, Representative and a Senator from Arkansas; born in Sumner, Chariton County, Mo., April 9, 1905; moved with his parents to Fayetteville, Ark., in 1906; attended the primary and secondary education teachers training schools of the University of Arkansas grades 1 through 12; graduated from the University of Arkansas at Fayetteville in 1925, as a Rhodes scholar from Oxford University, England, in 1928, and from the law department of George Washington University, Washington, D.C., in 1934; admitted to the District of Columbia bar in 1934; attorney, United States Department of Justice, Antitrust Division 1934-1935; instructor in law, George Washington University 1935, and lecturer in law, University of Arkansas 1936-1939; president of the University of Arkansas 1939-1941; also engaged in the newspaper business, in the lumber business, in banking, and in farming; elected as a Democrat to the Seventy-eighth Congress (January 3, 1943-January 3, 1945); was not a candidate for renomination in 1944; elected as a Democrat to the United States Senate in 1944; reelected in 1950, 1956, 1962, and again in 1968, and served from January 3, 1945, until his resignation December 31, 1974; unsuccessful candidate for renomination in 1974; chairman, Committee on Banking and Currency (Eighty-fourth through Eighty-sixth Congresses), Committee on Foreign Relations (Eighty-sixth through Ninety-third Congresses); counsel to the law firm of Hogan and Hartson, Washington, D.C., until 1993; awarded the Presidential Medal of Freedom on May 5, 1993; was a resident of Washington, D.C., until his death, February 9, 1995; cremated, ashes interred in Fulbright family plot, Evergreen Cemetery, Fayetteville, Ark.
Courtesy of Biographical Directory of the United States Congress
Next page