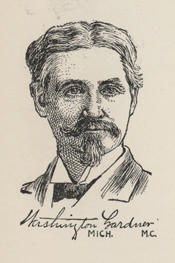 Representative from Michigan; born in Morrow County, Ohio, February 16, 1845; entered the Union Army and served in Company D, Sixty-fifth Regiment, Ohio Volunteer Infantry, from October 1861 to December 1865; severely wounded in action at Resaca, Ga.; attended school at Berea, Ohio, the Hillsdale College, Hillsdale, Mich., and was graduated from the Ohio Wesleyan University, Delaware, Ohio, in 1870; studied in the school of theology, Boston University, in 1870 and 1871; was graduated from the Albany Law School in 1876; was admitted to the bar and commenced practice in Grand Rapids, Mich.; entered the ministry of the Methodist Episcopal Church, in which he served twelve years; commander of the Department of Michigan, Grand Army of the Republic, in 1888; professor in Albion College 1889-1894; appointed secretary of state of Michigan in March 1894 and served until 1899; elected as a Republican to the Fifty-sixth and to the five succeeding Congresses (March 4, 1899-March 3, 1911); chairman, Committee on Expenditures in the Department of Commerce and Labor (Sixty-first Congress); unsuccessful candidate for reelection in 1910 to the Sixty-second Congress; commander in chief of the Grand Army of the Republic in 1913 and 1914; Commissioner of Pensions from March 22, 1921, to March 4, 1925, when he resigned; retired from public life and died in Albion, Mich., March 31, 1928; interment in Riverside Cemetery.
Courtesy of Biographical Directory of the United States Congress
Next page