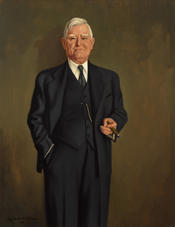 GARNER, John Nance, Representative from Texas and a Vice President of the United States; born near Detroit, Red River County, Tex., November 22, 1868; had limited educational advantages; studied law, admitted to the bar in 1890, and commenced practice in Uvalde, Uvalde County, Tex.; judge of Uvalde County, Tex., 1893-1896; member, State house of representatives 1898-1902; elected as a Democrat to the Fifty-eighth and to the fourteen succeeding Congresses (March 4, 1903-March 3, 1933); served as minority floor leader (Seventy-first Congress) and as Speaker of the House of Representatives (Seventy-second Congress); reelected to the Seventy-third Congress on November 8, 1932, and on the same day was elected Vice President of the United States on the ticket headed by Franklin D. Roosevelt; reelected Vice President in 1936 and served in that office from March 4, 1933, to January 20, 1941; retired to private life and resided in Uvalde, Tex., until his death there on November 7, 1967; interment in Uvalde Cemetery.
Courtesy of Biographical Directory of the United States Congress
Notice: By custom, the Speaker of the House rarely votes. Votes for GARNER, John Nance may appear to be missing as a result.
Next page