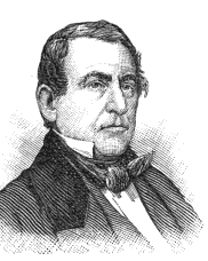 GENTRY, Meredith Poindexter, Representative from Tennessee; born in Rockingham County, N.C., September 15, 1809; moved with his parents to Williamson County, Tenn., in 1813; completed preparatory studies; studied law; was admitted to the bar and commenced practice in Franklin, Tenn.; member of the State house of representatives 1835-1839; elected as a Whig to the Twenty-sixth and Twenty-seventh Congresses (March 4, 1839-March 3, 1843); on account of the death of his wife refused to be a candidate for renomination in 1842; again elected to the Twenty-ninth and to the three succeeding Congresses (March 4, 1845-March 3, 1853); chairman, Committee on Indian Affairs (Thirtieth Congress); was not a candidate for renomination in 1852; unsuccessful candidate for Governor of Tennessee in 1855; retired to his plantation in Tennessee, where he remained until 1861; member of the First and Second Confederate Congresses 1862-1863; died in Nashville, Tenn., November 2, 1866; interment in Mount Olivet Cemetery.
Courtesy of Biographical Directory of the United States Congress
Next page