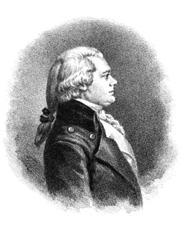 GOODRICH, Chauncey, (brother of Elizur Goodrich), Representative and a Senator from Connecticut; born in Durham, Middlesex County, Conn., October 20, 1759; pursued preparatory studies; graduated from Yale College in 1776; taught in the Hopkins Grammar School 1777-1778 and in Yale College 1779-1781; studied law; admitted to the bar in 1781 and began practice in Hartford, Conn.; member, State house of representatives 1793-1794; elected as a Federalist to the Fourth, Fifth, and Sixth Congresses (March 4, 1795-March 3, 1801); resumed the practice of law in Hartford; member, State executive council 1802-1807; elected as a Federalist to the United States Senate to fill the vacancy caused by the death of Uriah Tracy; reelected and served from October 25, 1807, until May 1813, when he resigned to become lieutenant governor; elected mayor of Hartford in 1812 and lieutenant governor of Connecticut in 1813, holding both offices at the time of his death; delegate to the Hartford Convention in 1814; died in Hartford, Conn., August 18, 1815; interment in the Old North Cemetery.
Courtesy of Biographical Directory of the United States Congress
Next page