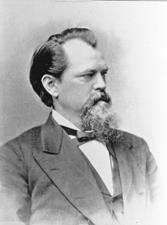 GORDON, John Brown, a Senator from Georgia; born in Upson County, Ga., February 6, 1832; attended private schools and the University of Georgia at Athens; studied law; admitted to the bar in 1853 and commenced practice in Atlanta, Ga.; engaged in coal mining; upon the outbreak of the Civil War entered the Confederate Army as captain of Infantry and rose to lieutenant general; resumed the practice of law in Atlanta, Ga.; unsuccessful Democratic candidate for Governor in 1868; elected as a Democrat to the United States Senate in 1873; reelected in 1879 and served from March 4, 1873, until May 26, 1880, when he resigned to promote the building of the Georgia Pacific Railroad; chairman, Committee on Commerce (Forty-sixth Congress); Governor of Georgia 1886-1890; again elected to the United States Senate and served from March 4, 1891, to March 3, 1897; declined to be a candidate for reelection; chairman, Committee on Coastal Defenses (Fifty-third Congress); engaged in lecturing and literary work; died in Miami, Fla., January 9, 1904; interment in Oakland Cemetery, Atlanta, Ga.
Courtesy of Biographical Directory of the United States Congress
Next page