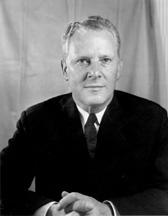 GORE, Albert Arnold, (father of Albert Arnold Gore, Jr.), Representative and a Senator from Tennessee; born in Granville, Jackson County, Tenn., December 26, 1907; attended the public schools; graduated from State Teachers College, Murfreesboro, Tenn., in 1932, and from Nashville (Tenn.) Y.M.C.A. night law school in 1936; taught in the rural schools of Overton and Smith Counties, Tenn., 1926-1930; county superintendent of education of Smith County 1932-1936; admitted to the bar in 1936 and commenced practice in Carthage, Tenn.; Tennessee commissioner of labor 1936-1937; elected as a Democrat to the Seventy-sixth Congress in 1938; reelected to the two succeeding Congresses and served from January 3, 1939, until his resignation on December 4, 1944, to enter the United States Army; reelected to the Seventy-ninth and to the three succeeding Congresses (January 3, 1945-January 3, 1953); was not a candidate for reelection but was elected in 1952 to the United States Senate; reelected in 1958 and again in 1964, and served from January 3, 1953, to January 3, 1971; unsuccessful candidate for reelection in 1970; chairman, Special Committee on Attempts to Influence Senators (Eighty-fourth Congress); resumed the practice of law with Occidental Petroleum Co. and became vice president and member of the board of directors; taught law at Vanderbilt University 1970-1972; member of the board of petroleum and coal companies; was a resident of Carthage, Tenn. until his death on December 5, 1998; interment in Smith County Memorial Gardens in Carthage, Tenn.
Courtesy of Biographical Directory of the United States Congress
Next page