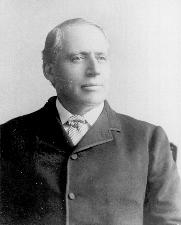 GORMAN, Arthur Pue, a Senator from Maryland; born in Woodstock, Howard County, Md., March 11, 1839; attended the public schools; appointed a page in the House of Representatives in 1852; transferred to the Senate through the influence of Stephen A. Douglas, who made him his private secretary, and subsequently served the Senate as page, messenger, assistant doorkeeper, assistant postmaster, and finally postmaster; removed from his Senate office in September 1866; immediately appointed collector of internal revenue for the fifth district of Maryland 1866-1869; director and later president of the Chesapeake Ohio Canal Co.; member, State house of delegates 1869-1875, serving as speaker for one session; member, State senate 1875-1881; elected as a Democrat to the United States Senate in 1880; reelected in 1886 and 1892 and served from March 4, 1881, to March 3, 1899; unsuccessful candidate for reelection; Democratic caucus chairman 1890-1898; chairman, Committee on Printing (Fifty-third Congress), Committee on Private Land Claims (Fifty-fifth Congress); was again elected to the United States Senate in 1902 and served from March 4, 1903, until his death in Washington, D.C., June 4, 1906; Democratic caucus chairman 1903-1906; interment in Oak Hill Cemetery.
Courtesy of Biographical Directory of the United States Congress
Next page