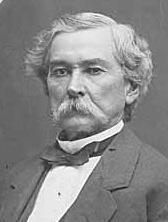 GORMAN, Willis Arnold, Representative from Indiana; born near Flemingsburg, Ky., January 12, 1816; pursued an academic course; moved to Bloomington, Ind., in 1835; was graduated from the law department of the Indiana University at Bloomington in 1845; was admitted to the bar the same year and commenced practice in Bloomington; clerk of the State senate in 1837 and 1838; member of Indiana house of representatives, 1841-1844; major and colonel of Indiana Volunteers in the Mexican War; elected as a Democrat to the Thirty-first and Thirty-second Congresses (March 4, 1849-March 3, 1853); was not a candidate for renomination in 1852; moved to Minnesota in 1853; Territorial Governor of Minnesota 1853-1857; delegate to the constitutional convention of Minnesota in 1857; practiced law in St. Paul, Minn., 1857-1861; member of the State house of representatives in 1858; entered the Union Army in 1861 and was colonel of the First Regiment, Minnesota Volunteer Infantry; was mustered out as brigadier general in 1864; resumed the practice of law; prosecuting attorney of St. Paul 1869-1875; died in St. Paul, Minn., May 20, 1876; interment in Oakland Cemetery.
Courtesy of Biographical Directory of the United States Congress
Next page