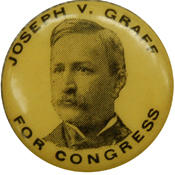 GRAFF, Joseph Verdi, Representative from Illinois; born in Terre Haute, Vigo County, Ind., July 1, 1854; was graduated from the Terre Haute High School, and attended Wabash College, Crawfordsville, Ind., one year; moved to Delavan, Ill., in 1873 and engaged in mercantile pursuits; studied law; was admitted to the bar in 1879 and commenced practice in Delavan, Ill.; moved to Pekin, Ill., and continued the practice of law; elected as an inspector of the Pekin public schools in 1891 and served as president of the board of education; delegate to the Republican National Convention in 1892; elected as a Republican to the Fifty-fourth and to the seven succeeding Congresses (March 4, 1895-March 3, 1911); chairman, Committee on Claims (Fifty-sixth through Fifty-eighth Congresses); unsuccessful candidate for reelection in 1910 to the Sixty-second Congress; continued the practice of law in Peoria, Ill., where he had moved in 1899; also engaged in banking; died in Peoria, Ill., November 10, 1921; interment in Glendale Cemetery, Washington, Tazewell County, Ill.
Courtesy of Biographical Directory of the United States Congress
Next page