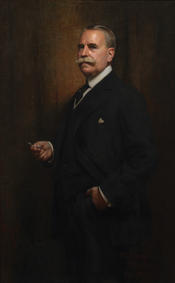 GRAHAM, George Scott, Representative from Pennsylvania; born in Philadelphia, Pa., September 13, 1850; attended the public schools, and was privately tutored; was graduated from the law department of the University of Pennsylvania at Philadelphia in 1870; was admitted to the bar in 1871 and commenced practice in Philadelphia; member of the select council of Philadelphia 1877-1880; unsuccessful candidate for district attorney of Philadelphia County in 1877; district attorney of Philadelphia County 1880-1899; declined to be a candidate for further election and resumed the practice of law in Philadelphia and New York City; professor of criminal law and procedure in the University of Pennsylvania 1887-1898; delegate to the Republican National Conventions in 1892 and 1924; elected as a Republican to the Sixty-third and to the nine succeeding Congresses and served from March 4, 1913, until his death at his summer home in Islip, N.Y., July 4, 1931; chairman, Committee on the Judiciary (Sixty-eighth through Seventy-first Congresses); interment in Woodlawn Cemetery, New York City.
Courtesy of Biographical Directory of the United States Congress
Next page