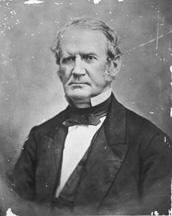 GRAHAM, William Alexander, (brother of James Graham), a Senator from North Carolina; born at Vesuvius Furnace, near Lincolnton, Lincoln County, N.C., September 5, 1804; pursued classical studies and graduated from the University of North Carolina at Chapel Hill in 1824; studied law; admitted to the bar in 1825 and commenced practice in Hillsboro, N.C.; member, State house of commons 1833-1840, serving twice as speaker; elected as a Whig to the United States Senate to fill the vacancy caused by the resignation of Robert Strange and served from November 25, 1840, to March 3, 1843; chairman, Committee on Claims (Twenty-seventh Congress); Governor of North Carolina 1845-1849; declined the missions to Spain and Russia in 1849; Secretary of the Navy in the Cabinet of President Millard Fillmore 1850-1852; unsuccessful Whig candidate for vice president in 1852 on the ticket with Winfield Scott; member, State senate 1854-1866, including service in the state Confederate Congress; elected to the United States Senate in 1866, but his credentials were not presented; member of the board of trustees of the Peabody Fund 1867-1875; arbitrator in the boundary line dispute between Virginia and Maryland 1873-1875; died at Saratoga Springs, N.Y., August 11, 1875; interment in the Presbyterian Church Cemetery, Hillsboro, N.C.
Courtesy of Biographical Directory of the United States Congress
Next page