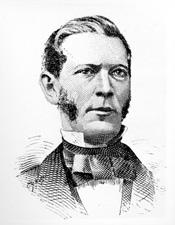 GREEN, James Stephen, Representative and a Senator from Missouri; born near Rectortown, Fauquier County, Va., February 28, 1817; attended the common schools; moved to Alabama and then to Missouri about 1838; studied law; admitted to the bar in 1840 and commenced practice in Monticello, Mo.; delegate to the State constitutional convention in 1845; elected as a Democrat to the Thirtieth and Thirty-first Congresses (March 4, 1847-March 3, 1851); was not a candidate for renomination in 1850; Charge dAffaires to Colombia 1853-1854; appointed Minister Resident in June 1854, but did not present his credentials; elected as a Democrat to the Thirty-fifth Congress, but did not take his seat, having been elected to the United States Senate to fill the vacancy in the term commencing March 4, 1855, and served from January 12, 1857, to March 3, 1861; chairman, Committee on Territories (Thirty-fifth and Thirty-sixth Congresses); died in St. Louis, Mo., January 19, 1870; interment in the Old Cemetery, Canton, Mo.
Courtesy of Biographical Directory of the United States Congress
Next page