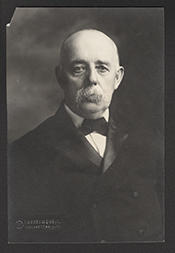 GREENE, William Stedman, Representative from Massachusetts; born in Tremont, Tazewell County, Ill., April 28, 1841; moved with his parents to Fall River, Mass., in 1844; attended the public schools; engaged in the real estate and insurance business; member of the common council 1876-1879, and served as president of that body 1877-1879; mayor of Fall River in 1880; reelected mayor in 1881, but resigned the same year; appointed postmaster of Fall River on March 22, 1881, and served until March 30, 1885; again served as mayor 1886 and 1895-1897; declined to be a candidate for reelection in 1898; general superintendent of State prisons 1888-1893; appointed postmaster of Fall River and served from March 9, to July 1, 1898, when he resigned; elected as a Republican to the Fifty-fifth Congress to fill the vacancy caused by the death of John Simpkins; reelected to the Fifty-sixth and to the twelve succeeding Congresses and served from May 31, 1898, until his death at Fall River, Mass., September 22, 1924; chairman, Committee on Expenditures in the Department of the Navy (Fifty-eighth Congress), Committee on Merchant Marine and Fisheries (Sixtieth, Sixty-first, and Sixty-sixth through Sixty-eighth Congresses); interment in Oak Grove Cemetery.
Courtesy of Biographical Directory of the United States Congress
Next page