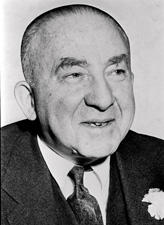 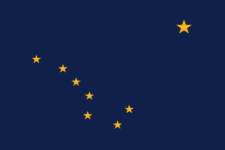 GRUENING, Ernest Henry, a Senator from Alaska; born in New York City, February 6, 1887; attended Drisler School and Sachs School; graduated from Hotchkiss School in 1903, Harvard College in 1907, and Harvard Medical School in 1912; gave up practice of medicine to enter journalism; reporter for Boston American in 1912 and, after a variety of jobs with several newspapers, became managing editor of the New York Tribune in 1917; served in the Field Artillery Corps in 1918; editor of The Nation 1920-1923; editor, New York Post 1932-1933; adviser to the United States delegation to the Seventh Inter-American Conference, Montevideo, Chile, in 1933; director of the Division of Territories and Island Possessions of the Department of the Interior 1934-1939; administrator of the Puerto Rico Reconstruction Administration 1935-1937; member of Alaska International Highway Commission 1938-1942; appointed Governor of Alaska by President Franklin Roosevelt in 1939 and twice reappointed, serving until 1953; elected to the United States Senate October 6, 1955, from the Territory of Alaska as an advocate of Alaska statehood but did not take the oath of office and was not accorded senatorial privileges; known as the father of Alaska statehood; elected as a Democrat to the United States Senate on November 25, 1958, and upon admission of Alaska as a State into the Union on January 3, 1959, in the classification of Senators from that State, drew the four-year term beginning on that day and ending January 3, 1963; reelected in 1962 and served from January 3, 1959, to January 3, 1969; unsuccessful candidate for renomination in 1968; president of investment firm; legislative consultant; died in Washington, D.C., June 26, 1974; cremated; ashes scattered over Mount Ernest Gruening, north of Juneau, Alaska.
Courtesy of Biographical Directory of the United States Congress
Next page