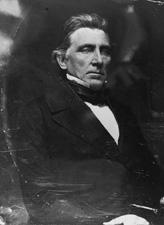 GWIN, William McKendree, Representative from Mississippi and a Senator from California; born near Gallatin, Sumner County, Tenn., October 9, 1805; pursued classical studies; graduated from the medical department of Transylvania University, Lexington, Ky., in 1828; practiced medicine in Clinton, Miss., until 1833; United States marshal of Mississippi in 1833; elected as a Democrat from Mississippi to the Twenty-seventh Congress (March 4, 1841-March 3, 1843); declined to be a candidate for renomination in 1842; moved to California in 1849; member of the State constitutional convention in 1849; upon the admission of California as a State into the Union was elected as a Democrat to the United States Senate and served from September 10, 1850, to March 3, 1855; reelected to the United States Senate to fill the vacancy occurring at the expiration of his term, caused by the failure of the legislature to elect, and served from January 13, 1857, to March 3, 1861; chairman, Committee on Naval Affairs (Thirty-second and Thirty-third Congresses), Committee on Post Office and Post Roads (Thirty-sixth Congress); an outspoken proponent of slavery, was twice arrested for disloyalty during the Civil War; traveled to France in 1863 in an attempt to interest Napoleon III in a project to settle American slave-owners in Mexico; retired to California and engaged in agricultural pursuits; died in New York City September 3, 1885; interment in Mountain View Cemetery, Oakland, Calif.
Courtesy of Biographical Directory of the United States Congress
Next page