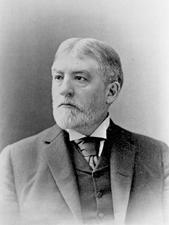 Representative and a Senator from Maine; born in Turner, Oxford County, Maine, June 9, 1836; educated in the common schools and at Hebron Academy; studied law in Portland, Maine; admitted to the bar in 1857 and commenced practice in Ellsworth, Maine; prosecuting attorney for Hancock County 1858-1866; member, State house of representatives 1867-1868, 1879-1880; elected as a Republican to the Forty-first and to the four succeeding Congresses (March 4, 1869-March 3, 1879); unsuccessful candidate for reelection in 1878 to the Forty-sixth Congress; declined appointments to the Cabinets of Presidents Ulysses Grant and Rutherford Hayes; elected as a Republican to the United States Senate in 1881; reelected in 1887, 1893, 1899, and 1905 and served from March 4, 1881, to March 3, 1911; was not a candidate for renomination; chairman, Committee on the Census (Fiftieth to Fifty-second Congresses; Fifty-ninth Congress), Committee on Private Land Claims (Fifty-third Congress), Committee on Printing (Fifty-fourth Congress), Committee on Naval Affairs (Fifty-fifth to Sixtieth Congresses), Republican Conference Chairman (1908-1911); Committee on Appropriations (Sixty-first Congress), Committee on Public Expenditures (Sixty-first Congress); member of the National Monetary Commission; retired from public life and was a resident of Washington, D.C., until his death on October 27, 1918; interment in Woodbine Cemetery, Ellsworth, Hancock County, Maine.
Courtesy of Biographical Directory of the United States Congress
Next page