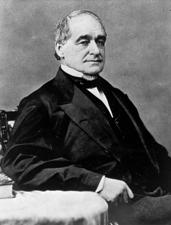 Representative and a Senator from Maine and a Vice President of the United States; born at Paris Hill, Oxford County, Maine, August 27, 1809; attended the district schools and Hebron Academy; took charge of the family farm and worked as a surveyor, compositor in a printing office, and school teacher; studied law; admitted to the bar in 1833 and practiced in Hampden, Penobscot County, until 1848; member, State house of representatives 1836-1841, 1847, and served as speaker in 1837, 1839, and 1840; unsuccessful Democratic candidate for election in 1840 to the Twenty-seventh Congress; elected as a Democrat to the Twenty-eighth and Twenty-ninth Congresses (March 4, 1843-March 3, 1847); chairman, Committee on Elections (Twenty-ninth Congress); unsuccessful Democratic candidate for election to the United States Senate in 1846; elected as a Democrat to the United States Senate in 1848 by the anti-slavery wing of the Democratic party to fill the vacancy caused by the death of John Fairfield; reelected in 1850 and served from June 8, 1848, to January 7, 1857, when he resigned to become Governor; chairman, Committee on Commerce (Thirty-first through Thirty-fourth Congresses); Committee on Printing (Thirty-second Congress); left the Democratic Party in 1856; Governor of Maine January to February 1857, when he resigned; elected to the United States Senate as a Republican and served from March 4, 1857, until his resignation, effective January 17, 1861, to become vice president; elected Vice President of the United States on the ticket with Abraham Lincoln 1861-1865; appointed collector of the port of Boston in 1865 but resigned in 1866; again elected to the United States Senate in 1869; reelected in 1875 and served from March 4, 1869, until March 3, 1881; was not a candidate for renomination; chairman, Committee on the District of Columbia (Forty-first Congress), Committee on Manufactures (Forty-second Congress), Committee on Mines and Mining (Forty-second and Forty-third Congresses), Committee on Post Office and Post Roads (Forty-fourth and Forty-fifth Congresses), Committee on Foreign Relations (Forty-fifth Congress); United States Minister to Spain from 1881 to 1882, when he resigned; devoted the remainder of his life to agricultural pursuits; died in Bangor, Maine, July 4, 1891; interment in Mount Hope Cemetery.
Courtesy of Biographical Directory of the United States Congress
Next page