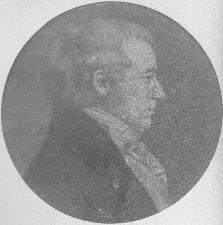 HARPER, Robert Goodloe, Representative from South Carolina and a Senator from Maryland; born near Fredericksburg, Va., in January 1765; moved with his parents to Granville, N.C., about 1769; received his early education at home and later attended grammar school; joined a volunteer corps of Cavalry when only fifteen years of age and served in the Revolutionary Army; made a surveying tour through Kentucky and Tennessee in 1783; graduated from the College of New Jersey (now Princeton University) in 1785; studied law in Charleston, S.C., teaching school at the same time; admitted to the bar in 1786 and commenced practice in Ninety-Sixth District, S.C.; moved to Charleston, S.C., in 1789; member, State house of representatives 1790-1795; elected from South Carolina to the Third Congress to fill the vacancy caused by the death of Alexander Gillon; reelected to the Fourth, Fifth, and Sixth Congresses and served from February 1795 to March 1801; unsuccessful candidate for reelection in 1800 to the Seventh Congress; chairman, Committee on Ways and Means (Fifth and Sixth Congresses); one of the managers appointed by the House of Representatives in 1798 to conduct the impeachment proceedings against William Blount; moved to Baltimore, Md., and engaged in the practice of law; served in the War of 1812, attaining the rank of major general; assisted in organizing the Baltimore Exchange Co. in 1815 and was a member of the first board of directors; member, State senate of Maryland; elected from Maryland to the United States Senate for the term beginning March 4, 1815, and served from January 1816 until December 1816, when he resigned; unsuccessful Federalist candidate for vice president in 1816; traveled extensively in Europe in 1819 and 1820; took a prominent part in the ceremonies on the occasion of Lafayettes visit to Baltimore in 1824; died in Baltimore, Md., January 14, 1825; interment in the family burial ground on his estate, "Oakland"; reinterment in Greenmount Cemetery, Baltimore, Md.
Courtesy of Biographical Directory of the United States Congress
Next page