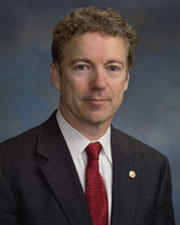 (Son of Ronald Ernest Paul), a Senator from Kentucky; born in Pittsburgh, Pa., January 7, 1963; attended Baylor University, 1981-1984; graduated Duke University, M.D., 1988; ophthalmologist; elected as a Republican to the United States Senate in 2010; reelected in 2016 for the term ending January 3, 2023; was an unsuccessful candidate for the Republican presidential nomination in 2016.
Courtesy of Biographical Directory of the United States Congress
Next page