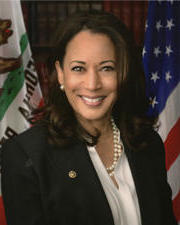 A Senator from California; born in Oakland, Calif., October 20, 1964; B.A., Howard University, 1986; J.D., University of California, Hastings College of the Law, 1989; admitted to the California bar in 1990; deputy district attorney, Alameda County, Calif., 1990-1998; managing attorney, San Francisco District Attorney’s Office; chief of the San Francisco City Attorney’s Division on Children and Families; district attorney of San Francisco 2004-2011; attorney general of California 2011-2016; elected as a Democrat to the United States Senate in 2016 and served from January 3, 2017, until January 18, 2021, when she resigned to become Vice President; was an unsuccessful candidate for the Democratic nomination for president in 2020, but was elected Vice President of the United States on the Democratic ticket headed by Joseph R. Biden, Jr. in 2020.
Courtesy of Biographical Directory of the United States Congress
Next page