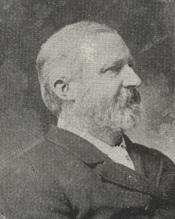 HATCH, William Henry, Representative from Missouri; born near Georgetown, Scott County, Ky., September 11, 1833; attended the schools of Lexington, Ky., studied law; was admitted to the bar in September 1854 and practiced; circuit attorney 1858 and 1860; during the Civil War served in the Confederate Army; commissioned captain and assistant adjutant general December 1862, and in March 1863 was assigned to duty as assistant commissioner of exchange of prisoners under the cartel, and continued in this position until the close of the war; elected as a Democrat to the Forty-sixth and to the seven succeeding Congresses (March 4, 1879-March 3, 1895); chairman, Committee on Agriculture (Forty-eighth through Fiftieth and Fifty-second and Fifty-third Congresses); unsuccessful candidate for reelection in 1894 to the Fifty-fourth Congress; engaged in agricultural pursuits; died near Hannibal, Marion County, Mo., December 23, 1896; interment in Riverside Cemetery.
Courtesy of Biographical Directory of the United States Congress
Next page