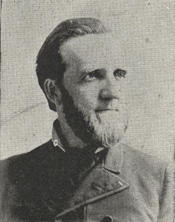 HEARD, John Taddeus, Representative from Missouri; born in Georgetown, Pettis County, Mo., October 29, 1840; attended the public schools and was graduated from the University of Missouri at Columbia in 1860; studied law; was admitted to the bar in 1862 and practiced several years in Sedalia, Pettis County, Mo.; member of the State house of representatives 1872-1875; served in the State senate 1880-1884; employed in 1881 by the fund commissioners of the State to prosecute and adjust all claims of the State against the General Government; elected as a Democrat to the Forty-ninth and to the four succeeding Congresses (March 4, 1885-March 3, 1895); chairman, Committee on District of Columbia (Fifty-third Congress); unsuccessful candidate for reelection in 1894 to the Fifty-fourth Congress; delegate to the Democratic National Convention in 1904; engaged in banking; retired from active business in 1922; died while on a visit to Los Angeles, Calif., January 27, 1927; interment in Crown Hill Cemetery, Sedalia, Mo.
Courtesy of Biographical Directory of the United States Congress
Next page