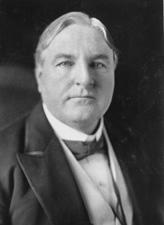 HEFLIN, James Thomas, (nephew of Robert Stell Heflin and uncle of Howell Thomas Heflin), Representative and a Senator from Alabama; born in Louina, Randolph County, Ala., April 9, 1869; attended the common schools of Randolph County, Southern University, Greensboro, Ala., and Alabama Agricultural and Mechanical College (later Auburn University), Auburn, Ala.; studied law, admitted to the bar in 1893, and commenced practice in Lafayette, Ala.; mayor of Lafayette 1893-1894; register in chancery from 1894 to 1896, when he resigned; member, State house of representatives 1896-1900; member of the State constitutional convention in 1901; secretary of State 1902-1904, when he resigned; elected as a Democrat to the Fifty-eighth Congress to fill the vacancy caused by the death of Charles W. Thompson; reelected to the Fifty-ninth and to the seven succeeding Congresses and served from May 19, 1904, until November 1, 1920, when he resigned, having become a candidate for Senator; chairman, Committee on Industrial Arts and Expositions (Sixty-second Congress); elected to the United States Senate as a Democrat on November 2, 1920, to fill the vacancy caused by the death of John H. Bankhead [1842-1920], in the term ending March 3, 1925; reelected in 1924 and served from November 3, 1920, to March 3, 1931; unsuccessful candidate for reelection in 1930, and for election to the House and Senate on several other occasions; special assistant to the United States Attorney General in Alabama 1936-1937; appointed special representative of the Federal Housing Administration 1935-1936, 1939-1942; retired; died in Lafayette, Ala., April 22, 1951; interment in Lafayette Cemetery.
Courtesy of Biographical Directory of the United States Congress
Next page