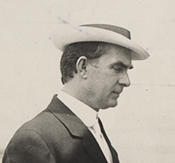 HENRY, Robert Lee, (great-great-great-grandson of Patrick Henry [1736-1799]), Representative from Texas; born in Linden, Cass County, Tex., May 12, 1864; attended the common schools; moved to Bowie County in 1878 and to McLennan County in 1895; was graduated from the Southwestern University of Texas at Georgetown in 1885; studied law; was admitted to the bar in 1886 and practiced for a short time in Texarkana, Tex.; was graduated from the University of Texas at Austin in 1887; elected mayor of Texarkana in 1890 but resigned in 1891; first office assistant to the attorney general of Texas 1891-1893; assistant attorney general 1893-1896; settled in Waco, McLennan County, Tex., in 1895 and practiced law; elected as a Democrat to the Fifty-fifth and to the nine succeeding Congresses (March 4, 1897-March 3, 1917); chairman, Committee on Rules (Sixty-second through Sixty-fourth Congresses); was not a candidate for renomination in 1916, but was an unsuccessful candidate for the Democratic nomination for United States Senator; engaged in the practice of law in Waco, Tex.; again an unsuccessful candidate for the Democratic nomination for United States Senator in 1922 and 1928; moved to Houston, Tex., in 1923 and resumed the practice of his profession; died in Houston, Tex., July 9, 1931, from a gunshot wound; interment in Rose Hill Cemetery, Texarkana, Tex.
Courtesy of Biographical Directory of the United States Congress
Next page