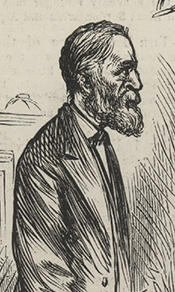 HEWITT, Abram Stevens, Representative from New York; born in Haverstraw, N.Y., July 31, 1822; attended the public schools of New York City and was graduated from Columbia College in 1842; studied law; was admitted to practice in October 1845; his eyesight failing, he engaged in the iron business with Peter Cooper and established works in New Jersey and Pennsylvania; appointed one of the ten United States scientific commissioners to visit the French Exposition Universelle of 1867 and made a report on iron and steel, which was published by Congress; organized and managed the Cooper Union for the advancement of science and art; elected as a Democrat to the Forty-fourth and Forty-fifth Congresses (March 4, 1875-March 3, 1879); was not a candidate for renomination in 1878; elected to the Forty-seventh, Forty-eighth, and Forty-ninth Congresses and served from March 4, 1881, until December 30, 1886, when he resigned; mayor of New York City in 1887 and 1888; appointed member of the Palisades Interstate Park Commission in 1900; elected a trustee of Columbia University in 1901; died in New York City January 18, 1903; interment in Greenwood Cemetery.
Courtesy of Biographical Directory of the United States Congress
Next page