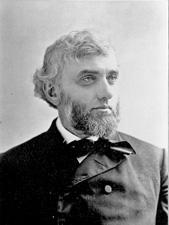 HISCOCK, Frank, Representative and a Senator from New York; born in Pompey, Onondaga County, N.Y., September 6, 1834; graduated from Pompey Academy; studied law; admitted to the bar in 1855 and commenced practice in Tully, Onondaga County; district attorney of Onondaga County 1860-1863; member of the State constitutional convention in 1867; elected as a Republican to the Forty-fifth and to the four succeeding Congresses and served from March 4, 1877, until his resignation on March 3, 1887, at the close of the Forty-ninth Congress, having been elected Senator; chairman, Committee on Appropriations (Forty-seventh Congress); elected as a Republican to the United States Senate and served from March 4, 1887, to March 3, 1893; unsuccessful candidate for reelection; chairman, Committee on Organization, Conduct, and Expenditures of Executive Departments (Fifty-first and Fifty-second Congresses); resumed the practice of law in Syracuse, N.Y.; died in Syracuse, N.Y., June 18, 1914; interment in Oakwood Cemetery.
Courtesy of Biographical Directory of the United States Congress
Next page