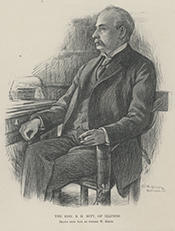 HITT, Robert Roberts, Representative from Illinois; born in Urbana, Champaign County, Ohio, January 16, 1834; moved to Ogle County, Ill., in 1837 with his parents, who settled in Mount Morris; attended the Rock River Seminary (later Mount Morris College), and De Pauw University, Greencastle, Ind.; first secretary of legation and Chargé dAffaires ad interim in Paris from December 1874 until March 1881; Assistant Secretary of State in 1881; elected as a Republican to the Forty-seventh Congress to fill the vacancy caused by the death of Robert M.A. Hawk; reelected to the Forty-eighth and to the eleven succeeding Congresses and served from November 7, 1882, until his death; chairman, Committee on Foreign Affairs (Fifty-first and Fifty-fourth through Fifty-ninth Congresses); Regent of the Smithsonian Institution from August 11, 1893, until his death; appointed by President McKinley in July 1898 as a member of the commission to establish government in the Hawaiian Islands; died at Narragansett Pier, R.I., September 20, 1906; interment in Oakwood Cemetery, Mount Morris, Ogle County, Ill.
Courtesy of Biographical Directory of the United States Congress
Next page