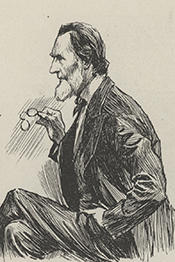 HOLMAN, William Steele, Representative from Indiana; born near Aurora, Dearborn County, Ind., September 6, 1822; attended the common schools and Franklin College, Franklin, Ind.; taught in the public schools; studied law; was admitted to the bar and practiced; judge of the probate court 1843-1846; prosecuting attorney 1847-1849; member of the State constitutional convention in 1850; member of the State house of representatives in 1851 and 1852; judge of the court of common pleas 1852-1856; elected as a Democrat to the Thirty-sixth, Thirty-seventh, and Thirty-eighth Congresses (March 4, 1859-March 3, 1865); not a candidate for reelection to the Thirty-ninth Congress; elected to the Fortieth and to the four succeeding Congresses (March 4, 1867-March 3, 1877); chairman, Committee on Appropriations (Forty-fourth Congress), Committee on Public Buildings and Grounds (Forty-fourth Congress); was not a candidate for election to the Forty-fifth Congress; elected to the Forty-seventh and to the six succeeding Congresses (March 4, 1881-March 3, 1895); chairman, Committee on Public Lands (Fiftieth Congress), Committee on Appropriations (Fifty-second Congress), Committee on Indian Affairs (Fifty-third Congress); unsuccessful candidate for reelection to the Fifty-fourth Congress; again elected to the Fifty-fifth Congress and served from March 4, 1897, until his death in Washington, D.C., April 22, 1897; interment in Veraestau Cemetery, Aurora, Ind.
Courtesy of Biographical Directory of the United States Congress
Next page