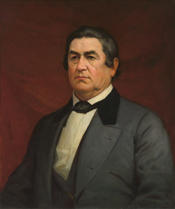 Representative and a Senator from Virginia; born at "Mount Pleasant," near Loretto, Essex County, Va., April 21, 1809; tutored at home; graduated from the University of Virginia at Charlottesville in 1828; studied law; admitted to the bar in 1830 and commenced practice at Lloyds; member, State general assembly 1834-1837; elected as a States-Rights Whig to the Twenty-fifth, Twenty-sixth, and Twenty-seventh Congresses (March 4, 1837-March 3, 1843); Speaker of the House of Representatives in the Twenty-sixth Congress; unsuccessful candidate for reelection to the Twenty-eighth Congress; elected to the Twenty-ninth Congress (March 4, 1845-March 3, 1847); chairman, Committee on the District of Columbia (Twenty-ninth Congress); elected to the United States Senate in 1846; reelected in 1852 and 1858 and served from March 4, 1847, to March 28, 1861, when he withdrew; expelled from the Senate on July 11, 1861, for support of the rebellion; chairman, Committee on Public Buildings (Thirtieth through Thirty-second Congresses), Committee on Finance (Thirty-first through Thirty-sixth Congresses); delegate from Virginia to the Confederate Provincial Congress at Richmond; Confederate Secretary of State 1861-1862; served in the Confederate Senate from Virginia in the First and Second Congresses 1862-1865 and was President pro tempore on various occasions; was one of the peace commissioners that met with President Abraham Lincoln in Hampton Roads in February 1865; briefly imprisoned at the end of the Civil War; State treasurer of Virginia 1874-1880; collector for the port of Tappahannock, Va. 1885; died on his estate 'Fonthill,' near Lloyds, Va., on July 18, 1887; interment in 'Elmwood,' the family burial ground, near Loretto, Va.
Courtesy of Biographical Directory of the United States Congress
Notice: By custom, the Speaker of the House rarely votes. Votes for HUNTER, Robert Mercer Taliaferro may appear to be missing as a result.
Next page