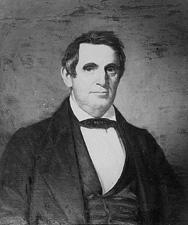 Representative and a Senator from Connecticut; born in Norwich, Conn., November 8, 1788; pursued classical studies; graduated from Yale College in 1806; taught in the Litchfield South Farms Academy one year; studied law; admitted to the bar and commenced practice in Litchfield; member, State house of representatives 1829; elected to the Twenty-first, Twenty-second, and Twenty-third Congresses and served from March 4, 1829, to August 16, 1834, when he resigned to accept the appointment of judge of the State supreme court of errors; moved to Norwich in 1834; elected as a Whig to the United States Senate to fill the vacancy caused by the death of Thaddeus Betts; reelected, and served from May 4, 1840, until his death in Norwich, Conn., November 2, 1847; chairman, Committee on Commerce (Twenty-seventh and Twenty-eighth Congresses); interment in Old Norwich Town Cemetery.
Courtesy of Biographical Directory of the United States Congress
Next page