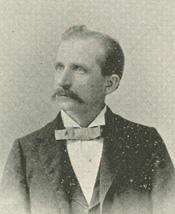 Representative from Georgia; born in Monticello, Jasper County, Ga., January 31, 1853; attended private schools in Monticello and was graduated from the University of Georgia at Athens in 1870; studied law at the University of Virginia at Charlottesville, and was graduated from the law department of the University of Georgia in 1872; was admitted to the bar the same year and commenced practice in Monticello in August 1872; moved to Macon, Ga., in 1875 and continued the practice of law; appointed solicitor general for the Macon Judicial Court on January 31, 1877, and served in that capacity until January 31, 1881; member of the State house of representatives 1882-1885; city attorney of Macon 1887-1892; served in the State senate in 1888 and 1889; appointed judge of the superior court of the Macon circuit in October 1892, and elected to the same office January 1, 1893, serving until May 1, 1894, when he resigned; elected as a Democrat to the Fifty-fourth and to the nine succeeding Congresses (March 4, 1895-March 3, 1915); was not a candidate for renomination in 1914; delegate to the Democratic National Convention in 1916; resumed the practice of law in Macon, Ga., also engaged in banking; died in Macon, Ga., April 21, 1938; interment in Rose Hill Cemetery.
Courtesy of Biographical Directory of the United States Congress
Next page