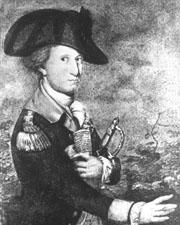 JACKSON, James, (father of Jabez Y. Jackson and grandfather of James Jackson [1819-1887]), Representative and a Senator from Georgia; born in Moreton-Hampstead, Devonshire, England, September 21, 1757; emigrated to Georgia in 1772 and located in Savannah; served in the Revolution with the Georgia State forces; studied law and built a lucrative practice in Savannah; several times elected to the state legislature; elected governor of Georgia in 1788 but declined; planter; elected to the First Congress (March 4, 1789-March 3, 1791); contested the election of Anthony Wayne in the Second Congress and the seat was declared vacant by the House of Representatives March 21, 1792; elected to the United States Senate and served from March 4, 1793, until his resignation in 1795; again a member of the State legislature; Governor of Georgia 1798-1801; was again elected as a Democratic Republican to the United States Senate and served from March 4, 1801, until his death in Washington, D.C., March 19, 1806; interment in the Congressional Cemetery.
Courtesy of Biographical Directory of the United States Congress
Next page