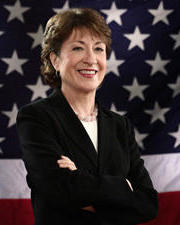 COLLINS, Susan Margaret, a Senator from Maine; born in Caribou, Aroostook County, Maine, December 7, 1952; graduated from St. Lawrence University, Canton, NY 1975; worked for United States Senator William S. Cohen 1975-1987, serving as staff director of the Senate Governmental Affairs Subcommittee on the Oversight of Government Management 1981-1987; commissioner of the Maine Department of Professional and Financial Regulation 1987-1992; New England regional director, United States Small Business Administration 1992; served as deputy state treasurer of Massachusetts, 1993; won an eight-way Republican primary to become the first woman nominated for governor of Maine in 1994, but lost general election; elected as a Republican to the United States Senate in 1996; reelected in 2002, 2008, and again in 2014 for the term ending January 3, 2021; chair, Committee on Governmental Affairs (One Hundred Eighth Congress), Committee on Homeland Security and Governmental Affairs (One Hundred Ninth Congress); Special Committee on Aging (One Hundred Fourteenth Congress).
Courtesy of Biographical Directory of the United States Congress
Next page