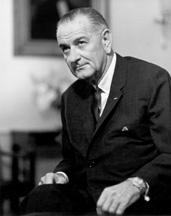 Representative and a Senator from Texas and a Vice President and 36th President of the United States; born on a farm near Stonewall, Gillespie County, Tex., on August 27, 1908; moved with his parents to Johnson City, in 1913; attended the public schools of Blanco County, Tex.; graduated from Southwest Texas State Teachers College at San Marcos (now known as Texas State University-San Marcos) in 1930; taught high school 1928-1931; served as secretary to Congressman Richard M. Kleberg in Washington, D.C., 1931-1935; attended the Georgetown University Law School, Washington, D.C., 1934; State director of the National Youth Administration of Texas 1935-1937; elected as a Democrat to the Seventy-fifth Congress by special election, April 10, 1937, to fill the vacancy caused by the death of James P. Buchanan; reelected to the five succeeding Congresses and served from April 10, 1937, to January 3, 1949; first Member of Congress to enlist in the armed forces after the Second World War began; served as lieutenant commander in the United States Navy 1941-1942; was not a candidate for renomination to the Eighty-first Congress in 1948; elected to the United States Senate in 1948; reelected in 1954 and again in 1960 and served from January 3, 1949, until January 3, 1961, when he resigned to become Vice President; Democratic whip 1951-1953; minority leader and Democratic caucus chairman 1953-1955; majority leader and Democratic caucus chairman 1955-1961; Democratic Policy Committee chairman 1953-1961; chairman, Special Committee on the Senate Reception Room (Eighty-fourth Congress), Special Committee on Astronautics and Space (Eighty-fifth Congress), Committee on Aeronautical and Space Sciences (Eighty-fifth and Eighty-sixth Congresses); elected Vice President of the United States in November 1960, on the Democratic ticket with John F. Kennedy, for the term beginning January 20, 1961; on the death of President Kennedy was sworn in as President of the United States on November 22, 1963; elected President of the United States in 1964, for the term commencing January 20, 1965, and served until January 20, 1969; did not seek reelection in 1968; retired to his ranch near Johnson City, Tex.; died on January 22, 1973; lay in state in the Capitol Rotunda, January 24-25, 1973; interment in the family cemetery at the LBJ ranch; posthumously awarded the Presidential Medal of Freedom on June 9, 1980.
Courtesy of Biographical Directory of the United States Congress
Next page