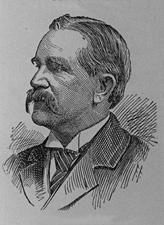 JOHNSTON, Joseph Forney, a Senator from Alabama; born at Mount Welcome, Lincoln County, N.C., March 23, 1843; attended the country schools in Lincoln County; while attending a military school in Alabama at the outbreak of the Civil War, enlisted as a private in the Confederate Army, rose to the rank of captain, and served from 1861 to 1865; studied law; admitted to the bar in 1866 and practiced in Selma, Ala.; moved to Birmingham, Ala., in 1884 and became president of the Alabama National Bank, resigning in 1894; became president of the Sloss Iron & Steel Co. in 1887; Governor of Alabama 1896-1900; elected as a Democrat to the United States Senate in August 1909 to fill the vacancy in the term ending March 3, 1909, caused by the death of Edmund W. Pettus; simultaneously elected for the term commencing March 4, 1909, and served from August 6, 1907, until his death in Washington, D.C., August 8, 1913; chairman, Committee on the University of the United States (Sixty-second Congress), Committee on Military Affairs (Sixty-third Congress); interment Elmwood Cemetery, Birmingham, Ala.
Courtesy of Biographical Directory of the United States Congress
Next page